Our nocturnal visitors had been back again to the site and this time they seem to have tried to set up residence in the Area 1 spoil heap. When we arrived down to the site this morning there were several burrows dug into the heap with a series of cute little footprints all around. They seem to have given up, however, as the holes weren’t too deep and were apparently unoccupied. As long as they confine themselves to the spoil heap I don’t mind too much – on some other sites I have dug on rabbit burrows had done a lot of damage to the archaeology. For some reason they don’t seem to be interested in the Area 2 spoil heaps. 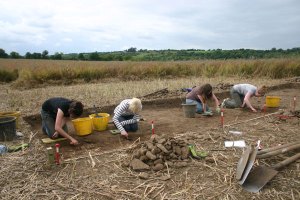 Troweling down in Area 1.

On the work front the last of the ploughsoil was taken down – two half squares and one full square. This was easily achieved before the morning break and there was a certain air of proud satisfaction at the final moment. 30 square metres of ploughsoil removed and sieved since the start of the dig. After the break we took a second series of magnetic susceptibility samples from the base of ploughsoil using plastic implements in order to reduce the possibility of contamination. One sample was taken from each metre square and duly brought up to the cabin at lunch time. Once this was done we were ready to start troweling the surface to remove the last skim of ploughsoil and start identifying the features. Working from east to west in column I squares 1-5, we uncovered a band of hard, compact, yellowish soil which gradually gave way to darker slightly less compact, more fill-like soil with frequent flecks and larger pieces of charcoal and animal bone, also with occasional pieces of flint. This looks like the top of the fill of the north-south ditch identified in the geophysics. We will continue tomorrow and see what emerges. 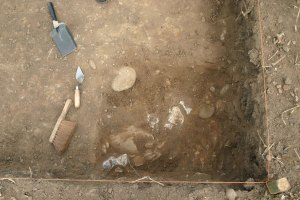 The sondage in Area 2. 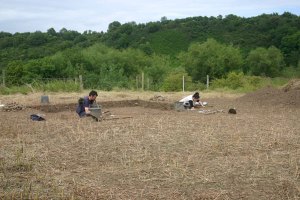 Matt and Eimear in Area 2.

In Area 2 Matt, Tomás and Ciara continued to take down the last skim of ploughsoil using a combination of troweling and mattocking. As described yesterday, a number of possible features had been identified yesterday along the northern side of the cutting. However, there were no similar features visible elsewhere in the cutting that might correspond the the geophysical anomalies. Matt carried out a sondage, or test area, in the extreme southwest corner of the trench to determine exactly where subsoil was located and it emerged that there was another 10 to 15cm to be taken down. Thus, although the northern edge was relatively clear, there seems to be a shallow wedge of ploughsoil thickening towards the southern side of the cutting. There is usually an occasionally disturbed zone at the very base of the ploughsoil which is transitional between fully disturbed ploughsoil and never disturbed natural/subsoil with archaeological features. When ploughing takes place in a field, it doesnt necessarily plough to exactly the same depth as previous years with the result that there is no clear ‘line’ or interface between ploughsoil and ‘unploughed’ soil. Sometimes, depending on local soils, it is difficult to easily distinguish between regularly ploughed ploughsoil, occasionally ploughed base of ploughsoil and subsoil and it takes a bit of deliberation to establish where each ends and the next begins. Tomorrow they will remove this and trowel the surface back and hopefully we will see some more features.